Cards With Attitude – Decking Out A Good Game

Back when I was growing up, when people would play cards, it meant games like Go Fish, War, Poker, Rummy, Canasta…….the usual games listed in any good Hoyle book or hobby catalog.  There were a few others that I remember in my teenage years, such as Mille Bornes and Uno, which created some great interaction amongst friends during our afternoons after school and during the summer when it was raining.

After a time, I started noticing this wave of games called “Collectable Card Games” – where people collect various cards to do battle with each other.  Themed decks based on a TV show, anime series, or something else out of the imagination of whoever created it.  There are many more that have cropped up in recent years, but to me, there are always two main contenders that I enjoy, and each one for their own reasons. 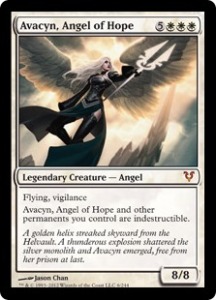 This card game started up around 1993, and in the beginning had some pretty basic rules.  Over time, the cards developed many different abilities, and you could use those cards to make some pretty formidable decks.  The cards themselves also had value, as some were much more rare than others.  You had commons, uncommons, rares, and then “mythic rares”, which often times were the ones that could change the tide of a game, depending on how you used them.  You can have any number of creatures out on the field, so it was not unheard of to have an army of hundreds of creatures doing battle on the field of your choice – or you could wipe out an army of hundreds of creatures as well.  This game teaches you a lot about strategy and how to put together a deck that will blow your opponents away.  For example, one of my favorite cards is “Avacyn, Angel of Hope”, as she can make other creatures that are on the battlefield under your control indestructible – a great thing to have to avoid getting plowed under by an aggressive opponent.

The rules can be complex, as you have to know how to deal with creatures, instants, sorceries, how to destroy and how to exile cards.  The boundaries are pretty much limitless.  The other nice thing about Magic is that the artwork on the cards is pure eye candy – even more now than when the game first started up.  A lot of talented artists put their skills to work to make some visually striking cards that people can do battle with.  You start off with a deck of 60 cards – this is the minimum.  There is no upper limit, although be careful how large you make your deck, as it can make it harder to get the card you really want to draw. 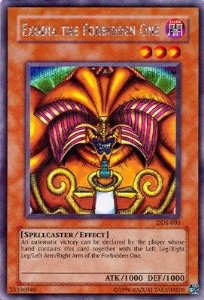 This game started out later than Magic, but to me, is no less fun to play.  When this game started out, it was a bash-up, mash-up, power-on-power slugfest to see which player could knock out the other opponent’s life points.  As the game progressed, cards started to have varied effects, depending on how they were played – or how your opponent played.  You started off with Normal monsters, then came Effect monsters, Fusions, Rituals, Synchros, Xyz monsters, and many others, along with a variety of spell and trap cards that you can play to enhance your strategy.  This game is best played on a play board, as there are a limited number of spaces you can put monsters and spells into – unlike Magic, which has no such restrictions.

You have a deck of 40 cards, which is the least amount, but you can have no more than  60 cards in your deck – this is your upper limit.  You can have an extra deck for your fusion, synchro, and Xyz monsters as well, so you can bring out some nice heavy-hitters when the conditions are right.  The art style isn’t quite as fancy as Magic, but there is some nice artwork to be had from these cards as well.  To date, the only unstoppable creature in the game is Exodia, as shown above.  If you have that card, plus all the arms and legs (total of 5 cards), then you win – just like that!  There are many, many strategies you can pull off, so don’t limit yourself to any one strategy – you can get very creative – even with a card deck upper limit!

In the end, whether you choose Magic, Yu-Gi-Oh, or any other collectable card game is as much fun as you make it out to be.  The collecting can be its own form of fun as well, as you search out cards that will help make you a better and stronger player.  There is no right or wrong card game to play – the style and mechanics will appeal to you in one game or another, and you’ll get drawn right in…..and that is not a bad thing at all, as card games entice human interaction – playing with real people instead of just computer characters, and that makes them even better than videogames in that own regard!  Enjoy!